January 11, 1966 started like any other mid-winter day in the small suburban town of Wanaque, New Jersey.

The air was clear and cold, kids were enjoying the holiday vacation from school, and residents of the Passaic County borough went about their usual daily routines.

Little did they know that before the day was over something would happen, something fantastic and unexplainable, that would change the lives of many of the townsfolk forever.

It all started in the early evening of that Tuesday night. It was about 6:30 PM, and the winter sun was already long gone over the western horizon, past the great Wanaque reservoir, and behind the darkened Ramapo mountain range.

Wanaque Patrolman Joseph Cisco was in his cruiser when a call from the Pompton Lakes dispatcher came over his police radio. It was a report of a "glowing light, possibly a fire."

Then as if right out of a sci-fi movie Cisco heard the words:

"People in Oakland, Ringwood, Paterson, Totowa, and Butler claim there’s a flying saucer over the Wanaque."

"I pulled into the sandpit, an open area to get my bearings," Cisco recalls. "There was a light that looked bigger than any of the stars, about the size of a softball or volleyball. It was a pulsating, white, stationary light changing to red. It stayed in the air; there was no noise. I was trying to figure out what it was."

Wanaque Mayor Harry T. Wolfe, Councilmen Warren Hagstrom and Arthur Barton, and the Mayor’s 14-year-old son Billy were on their way to oversee the burning of the borough’s Christmas trees, when they heard the reports that something "very white, very bright, and much bigger than a star" was hovering over the Wanaque Reservoir.

They decided to pull into a sandpit near the Raymond Dam at the headworks to meet Officer Cisco and get a better look at the ‘thing.’

The Mayor’s son Billy spotted the object at once, flying low and gliding "oddly" over the vast frozen lake "like a huge star." "But it didn’t flicker," Billy told reporters the next day. "It was just a continuous light that changed from white to red to green and back to white."

"The phenomenon was terribly strange." Mayor Wolfe would later recall. He described the shape of the unidentified object as oval, and estimated it to be between two and nine feet in diameter. 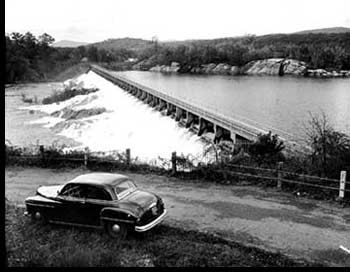 The next thing that officer Cisco remembers is his patrol car’s radio "going bananas," as calls from all over a 20-mile radius flooded into the police headquarters. Cisco radioed Officer George Dykman, who was on patrol nearby. Just as Dykman received Cisco’s message, two teenagers came running up to his patrol car frantically pointing at the sky and shouting "Look, look!"

At that moment Wanaque Civil Defense Director Bentley Spencer drove up with CD member Richard Vrooman. "The Police radios are all jammed up!" Spencer said excitedly. Dykman and Spencer gaped at the sky along with Michael Sloat, 16, and Peter Melegrae, 15. "What the heck is it?" Dykman wondered out loud. "Never seen anything like it in my life."

Back at the sandpit Joseph Cisco’s radio crackled as another unbelievable message came across the airwaves: "Something’s burning a hole in the ice! Something with a bright light on it, going up and down!" Then another transmission fought its way through the din: "Oh boy! Something just landed in front of the dam!"

Spencer and reservoir employee Fred Steines raced to the top of the 1,500-foot long Raymond Dam where they described seeing "a bolt of light shoot down, as if attracted to the water... like a beam emitted from a porthole."

Patrolman Cisco, Mayor Wolfe and Town Councilmen Hagstrom and Barton climbed to the top of the dam to get a better look.

"There was something up there that was awful bright." Hagstrom recalls. "We don’t know what it was. We thought it was a helicopter, but we didn’t hear a motor. It looked like a helicopter with big landing lights on. We got goose bumps all over when we saw where the hole was."

According to John Shuttle, another Councilman who witnessed the UFO, there was no doubt about it: "It was there." He said. "I saw it, a brilliant white object, two to three feet across, and its color - no, not color, shade - it kept changing." 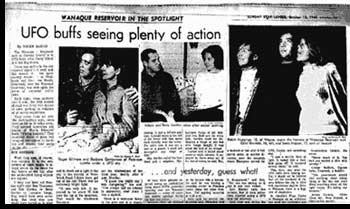 One day after the initial sightings of the UFO, Patrolman Jack Wardlaw reported seeing a "bright white disk" floating in the vicinity of his home in the Stonetown section of Wanaque, just west of the reservoir.

"It seemed like only a block away, above Lilly Mountain, maybe 1,000 feet up," Wardlaw said. "Don’t ask me what it was. But I do know it wasn’t any helicopter, plane, or comet. It shot laterally right and left. It stopped. It moved up straight. And then it moved down and disappeared in the direction of Ringwood to the north."

Wardlaw described the object as "definitely disc-shaped and at certain angles, egg-shaped."

Sgt. David Sisco said that he was on patrol at about 6:30 that evening when the UFO noiselessly hovered into view.

"It glided, then streaked faster than a jet," he told reporters, "and when it rose, it went straight up."

Reservoir guard and former Wanaque policeman Charles Theodora and Sisco went to the top of the dam to take a look at the bright light.

"We looked across the water and saw a cylinder-shaped object," Theodora remembers.

"It was moving back and forth like a rocking chair motion. We were astonished."

A few minutes later the object shot straight up into the night sky, until it was indistinguishable from the other stars. Theodora said that he didn’t hear a sound while the light show was going on.

"I didn’t believe in UFOs, I thought they were a lot of bull. And then I saw it. It was a breathtaking sight; something I’ll never forget."

After the January 1966 sightings, radar was installed atop the reservoir dam.