Gossamer-like ôangelĺs hair,ö emanating from UFOs, has fallen to Earth in a number of cases; sometimes it drapes fences, utility lines, trees, and in a few cases, entire towns.

Strands of the bizarre substance range from a few inches to more than one hundred feet long. It is white, sometimes sticky, and usually evaporates entirely. One horrified researcher watched it disappear as he raced toward his lab, intent on analyzing it.

Angelĺs hair has been compared to ectoplasm, a substance which spiritualists claim to be involved in materialization of spirits. Ghosts are said to ôslimeö people; this gelatinous slime seems to be the first cousin of ectoplasm. However, in the Golden Age of Spiritualism, famous mediums were exposed as they faked ectoplasm. They infamously swallowed such material as cheese cloth and regurgitated it, claiming it to be ectoplasm.

There is a theory amongst some UFO researchers, however, that paranormal slime is connected to UFO emissions of angelĺs hair. These phenomena run parallel and one theory states, they both could be caused by excess energy used to create materialization in the 3 dimensional (physical) worlds.

With few exceptions, angelĺs hair is a rare commodity today, but it was a large part of the UFO phenomenon in the 1950s and 1960s. ôThe UFO Evidence,ö compiled by my friend Richard Hall, now deceased, was for years a guidepost to UFO researchers; it features ôthe angelĺs hairö phenomenon as do old NICAP reports. It was as common (perhaps more common), as burned marks on the ground or radar returns from a UFO. 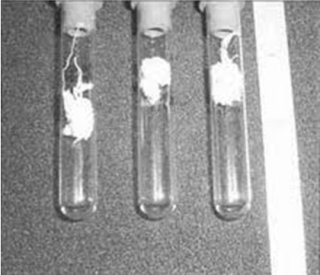 Samples of Angelĺs Hair from NICAP

Two personal examples from the 1950s: A friend was riding with his parents on a 1950s Texas country road when 2 UFO whipped past them, low in the sky. Immediately afterward, angelĺs hair draped the fence posts, trees, and electric wires. Needless to say, my friend began a lifelong search for the UFO answer.

In my own second encounter by Eagle Lake, Ontario, where my family was vacationing, the book I was holding when the encounter began was covered in a substance which somehow got absorbed into the very molecules of the book. The book was ôToys in the Atticö about not being afraid of the unknown; I kept the book until I was 22 years old.

Sadly, it was lost in a move to the Virgin Islands. I was 4 or 5 at the time of the encounter and my mother asked later how my book got ôlardö on it since we had no lard.

I donĺt aim to go into the details of this encounter at this time, but simply wonder if my book got ôlardedö (slimed) in some materialization process. The being appeared in our cabin while I was alone and thus a ôbeaming inö might have occurred.

That same day, my aunt and uncle were in a canoe on the lake and saw two UFOs; I did not learn about this sighting until many years later, and so it could not have influenced me or my encounter in any way.

Perhaps there is a difference in the climate which does not help create the strange substance as readily. Or perhaps like the child in ôPuff the Magic Dragon,ö UFO occupants do not wish to leave their souvenir as much today but preferred humans in a more innocent time and bestowed this disappearing gift.

(I note here that the substance saturating my childhood book did not disappear; it seemed to be more gelatinous than angelĺs hair and was actually molecularly meshed with my book, like a strange stain).

All of this is consistent with plasma activity. For instance, plasma EM heat and radiation coupled with water and dust create a substance like angel hair.ö

This is the closest scientific explanation I have found for angelĺs hair: In the laboratory, electromagnetic heat and radiation from plasma activity, combined with water and dust, create a substance like angelĺs hair.ö Does this nearly prove that at least some of our ET visitors are from a plasma world, or from the dark plasma biosphere?

One study says that in almost half the cases of angelĺs hair, it has been seen descending from cigar-shaped UFOs which have cloudlike formations under or around them.

Although these fibers have sometimes been confused with floating spider webs, they can be differentiated by the fact that they dissolve upon contact with the ground. In one of the few examinations performed on angelĺs hair, it seems to contain boron, silicon, calcium and magnesium.

It is similar in composition to borosilicate glass. However, its ephemeral nature makes more specific analysis impossible. This study would seem to be roughly consistent with the EM heat, radioactivity, water and sand theory.

In 1952, two of the most famous angelĺs hair cases occurred. These were the Oloron and Gaillac sightings in France.

In Oloron, many witnesses reported seeing over 30 red, spherical UFOs flying overhead, along with what the local school superintendent described as "a narrow cylinder, apparently inclined at a 45-degree angle, slowly moving in a straight line toward the southwest. A sort of plume of white smoke was escaping from its upper end."

From these craft came a white, hair-like substance, which covered telephone wires, tree branches and the roofs. When people rolled these strands into a ball, they turned into a gelatinous substance and vanished. Ten days later, these events were repeated in Gaillac, France.

On October 27, 1954, Gennaro Lucetti and Pietro Lastrucci stood on the balcony of a hotel in St. Mark's Square in Venice and saw two "shining spindles" flying across the sky leaving a trail of the angel hair.

A fall of angel hair in Florida in 1957 was witnessed by Craig Philips who became the director of America's National Aquarium. Phillips collected samples; however, these disappeared before he could reach a laboratory. Over the years, there have been many reports of falls of angel hair around the world.

Two more ôrecentö reports: On February 10, 1978, a large number of fibers fell from the sky for a period of two hours near Samaru, New Zealand.

According to USA Today, "Residents of a small Australian community swear that they saw cobwebs fall from the sky after UFOs passed overhead. Dozens of residents of Quirindi called Australia's National UFO Hotline after the incident."

According to the Tamworth, N.S.W. North Daily Leader, "Mrs. E. Stansfield, 61 years (old), said that she saw cobwebs falling from the sky. She saw twenty silver balls which passed overhead. When she went out to her daughter, she too was covered in fine strands of cobweb. When she tried to pick it up, it disintegrated in her hand. The family car had cobwebs all over it."

The incident took place at 5:04 p.m. on Sunday, August 9, 1998. Quirindi is just north of the Liverpool mountain range, about 70 kilometers (42 miles) southwest of Tamworth, N.S.W. and 300 kilometers (180 miles) northwest of Sydney. Australian researcher Raymond Brooks reported that the "various craft" performed aerobatic maneuvers over the farms "for 1.5 hours, including the release of 'angel hair (end of UFO Casebook case).

Of course the obvious problem with researching angelĺs hair with todayĺs technology (if we could get it to the lab), is that there seems to be NO angelĺs hair from UFOs in the present day. This in itself is a curious question ľ why not? Might the ETs keep developing new technology too?

If they are plasma or dark plasma (dark matter) beings, this tells us that they are not organically capable of just appearing as a flying disk of super-heated plasma. It tells us that they too rely on technology or some type of evolving methodology. If they are humans from some point in the future, then it tells us they still depend on propulsion systems and have not evolved into quasi-gods who can think themselves into flying overhead.

Or maybe we have just forgotten to look for angelĺs hair after sighting a low flying UFO. It is (or was), a solid piece of evidence and offered real information on UFO occupants and their flying machines. Maybe angelĺs hair is due for a comeback!

We will immediately comply with any copyright owner who wants their material removed or modified. All articles and images contained on the UFO Casebook which are not created by the UFO Casebook are attributed to the original owner/creator.