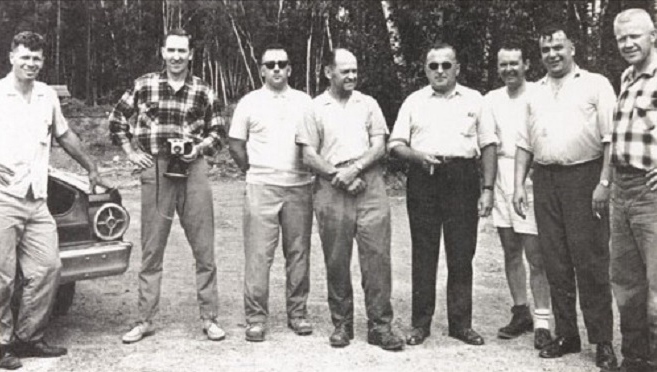 “Okay, Yankee boys, having trouble? Come out and we’ll see what we can do about it.”

Michalak yelled out in reply, but received no answer. He then ventured up to the craft, which he touched. It burned his glove. A door suddenly opened up and he poked his head in. Michalik then saw a brightly lit control room.

It is difficult to describe what happens next. The door suddenly shut and he found himself near a vent, which emitted a powerful gust of heat. This set Michalik’s shirt on fire and, as he escaped, he became nauseous and started vomiting.

He apparently encountered a police officer who wrote a report. This is interesting for in the more fanciful alien encounter we see he tried to wave down a police vehicle, but was ignored.

Iron Sceptic believes Michalik was likely drunk, and investigators found him to be fond of alcohol. However, if there were signs of alcohol, the police officer who interviewed Michalik would have smelled it.

Sceptic makes a number of valid points concerning Michalik’s refusal to show his burns, and not voluntarily showing his picture. He also says Michalik refused assistance to a medical facility.

However, one could say the police report reflects a person in some type of shock. Hence, what struck me about the Michalak case is how unlikely the alleged aircraft was an alien vehicle. For starters, the smell of sulphur would indicate some problems with a fuel line. Would aliens capable of interstellar travel have problems with fuel and need an exhaust system?

The English accented fellow was clearly a technician or pilot.

The alien encounter believers have eradicated this account from their lexicon. While skeptics use the English discussion angle to display Michalik’s erratic insanity; nevertheless, by all accounts Michalik was a lucid individual.

He also initially stated he thought the aircraft was an experimental vehicle. Both sides of the UFO debate seeking to frame the issues within their own paradigms conveniently overlook this important statement.

Iron Sceptic points out that Whiteshell Park is located 75 km from the U.S border. What he fails to discuss is nearby there are three air force bases. The Royal Canadian Air force base in Winnipeg is the closest. On the U.S side of the border, Cavalier and Grand Forks are but a quick flight away.

The Canadian wing of the British company Avro had tested their famous Avrocar; in the fifties it was a joint venture with the USAF. Could, this have been a further development of the idea? It could also explain the English bloke hanging around.

There can be no doubt Michalik told some porkies, and he likely embellished his story. Nevertheless, if he was lying about seeing something (at the very least) he chose an odd way to discuss it.

Therefore, I sit comfortably on the fence concerning this account. If he is lying, it’s no big deal because this has nothing to do with aliens in any way. If it was some type of experimental vehicle then that is interesting. It pays to question the motives of believers and skeptics alike.