UK pilots have reported a number of chilling near-misses with UFOs.

One incident involved David Hastings, a British pilot pictured to the left, who, along with his co-pilot, David Paterson, was flying a Cessna Skymaster plane over the Mojave Desert in America on Sept. 9, 1985.

"We were sitting there enjoying the sunshine when we both suddenly saw this speck out on the horizon at our 12 o'clock position," Hastings told HuffPost.

"This speck suddenly grew extremely quickly until we saw this huge shadow go over the top of us," he recounted. "But the most amazing thing about it was there was no noise and absolutely no movement or turbulence at all. We looked at each other, saying, 'What the hell was that?'"

At that point, both pilots felt that something was in the air off the port (left) side of their plane, but they couldn't see anything there. They agreed that they were able to sense something moving outside.

Hastings walked to the back of the plane, grabbed his camera and returned to the cockpit where he snapped two pictures out the window. All he was able to see in the camera viewfinder was the left wing of the plane and the ground below. 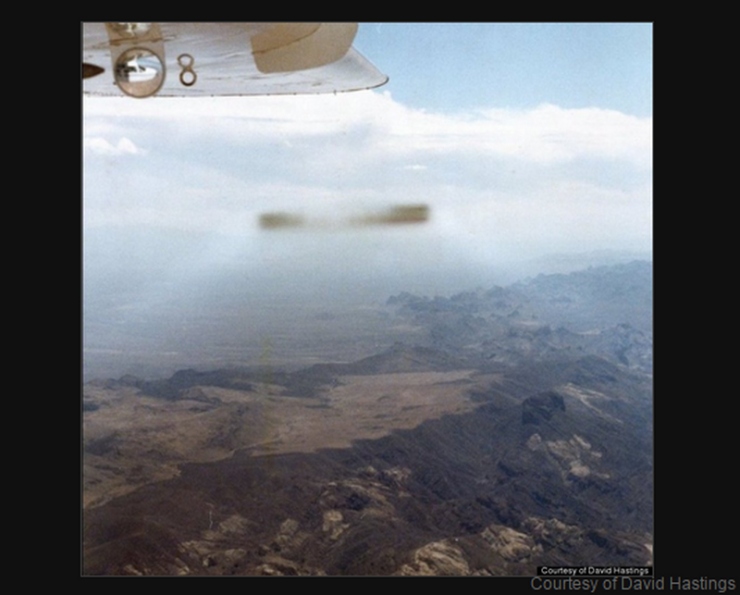 It was only after they returned to San Francisco and got the pictures developed that they knew they'd encountered something extraordinary.

"One picture showed what we expected to see -- the aircraft wing and the ground," said Hastings. "But in the second one, there was this [cigar-shaped] thing. We were both convinced that it was not a manmade object.

"Several pilots have seen UFOs in England, so it didn't surprise me, but I was surprised that we actually got a picture of it."

Hastings recalls that, although he wasn't frightened by the object, he was mostly concerned about the initial encounter with it and the possibility of a mid-air collision. No hoax was ever determined in this case, which remains unexplained to this day.

Why do aviation officials avoid talking about UFOs? In the UK, Clarke suggests it's something that could result in bad publicity.

"Don't forget, this is a commercial operation and the aircrew are very reluctant to file a report because the airline companies don't want them answering questions about things that aren't part of the corporate image."