round object, structured around the top...

Editor's Note: I saw someone is trying to make the rounds with a hoax photo… they must have submitted it to MUFON.

This originally went around as taken in Australia, but I was able to prove a hoax on it at: http://www.theblackvault.com/casefiles/hoax-ufo-mothership-viral-photograph-taken-in-australia/

thanks to John Greenewald, Jr.

The man who snapped this photo says that there was what he called a "strange" storm going on at the time.

He says it sounded like a storm that might have a tornado on board. He was mostly interested in taking a good photo of lightning, which he managed to do.

When he heard the lighting crack, he took his photo, unknowing there was something else in the sky.

What appears to be round object, structured around the top, with glowing lights below clearly shows. In the distance you can clearly see a bolt of lightning.

After giving the photo some thought, I do not see a source that would have caused a reflection creatint the illusion of a UFO. The lightning seems to be distant, and would not have created the image anyway.

If you have an explanation, please let me know.UFO taken over Thunder Bay, Ontario 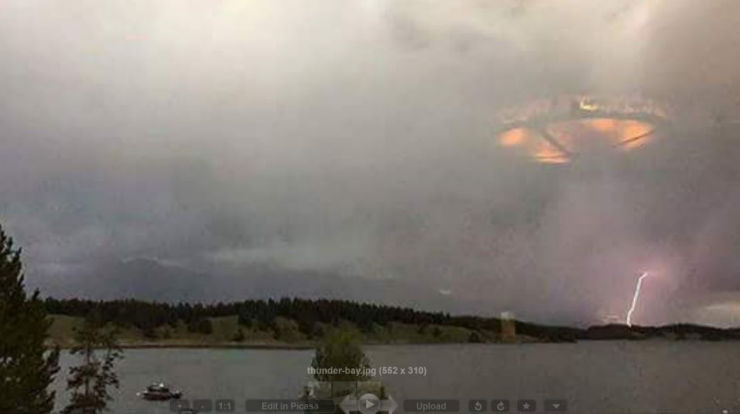