I did feel watched...

In the fall of 1973, October, I was 12 years old, I was watching TV (the six million dollar man) it was a new TV show and the only thing my stepfather watched (until "The A-Team" came out).

My mother asked me to take out the paper trash to burn; we lived on a dead end street beside a very large swamp area and separated our paper to burn out back. We had a large mowed field next to our house before the swampy area started, we always burned our paper trash at the edge of it before where the ground got too wet.

I reluctantly pulled myself away from the TV and ran out the back door grabbing the large paper grocery bag full of paper trash and a pack of matches. Planning to get this over with fast. I ran to the edge of the field, dropped the bag and flicked a few lit matches into it, waiting only a half second to make sure one would light the papers inside and ran back to the house eager to return to the new TV show.

As I ran in my mother was still standing on the back porch holding open the screen door with her back, once I was in the kitchen but not yet to the living-room, and my TV show, my mother said "Greg, what IS that?"

I walked to where she was and she stood gazing off into the darkening night sky, it was just after sunset, maybe 6 or 7 p.m. I looked to where she was looking and saw some flashing light in the distance and said "oh thats just a..." (ready to dismiss whatever and go back to TV).

That's as far as I got, I realized it was not a plane... it was too low, and wobbling, the wrong colors and too slow...

It was about a half mile away, at a spot where the nickle plate railroad tracks intersected with interstate 65. There was a viaduct there where the highway went over the railroad tracks. From where we stood I could see the headlights from the traffic and this object just above all the cars and trucks.

The viaduct was made on 2 hills maybe 80 feet tall with a bridge over them so the train could pass underneath I-65 on its way thru the swamp. I-65 is pretty much north-south and the nickle-plate railroad that went under it was pretty much east-west. The object looked about the same distance above the traffic as the viaduct is tall, making its altitude about 160 feet.

I stared a moment, thinking, before stepping down off the porch onto the driveway to escape the light from the kitchen and see it better, and also to move toward it a bit... let my eyes adjust to the dark. It was not a plane, too slow, too low, a helicopter? no sound, not a blimp, too fast...

I realized rather quickly it did not fit any category of flying things I knew of. I stared at it intently, it had green, red and blue lights rotating around it, the 3 lights forming a triangle, and some whitish light... and they were pulsing, not flashing, and it seemed to wobble forward kind of due to the elliptical rotation of the triangle of lights.

From a distance it looked like 2 steps forward one step back, but now it was closer and I could see that's how it moved, the center was sliding forward into the space between the center sphere and the outer rotating ring with the 3 lights mounted on it, as if you were walking while hula-hooping, and each time the hula-hoop was touching your back you would take a step forward, but it was a very smooth motion, and silent.

It was headed our way, and as it got closer I felt an overwhelming sense of awe and wonder and inside I knew this was unidentified, and flying... and an object! My heart was beating but I felt calm; hoping it was true, but thinking any minute it would reveal itself to be a helicopter or something else mundane.

It didn't. It came directly at me and then this huge craft silently floated directly above me and my yard and my house and was now so low I felt sure it intended on landing in the field next to our house (it wouldn't have fit).

Looking straight up at its underside I could see now the center sphere had a larger unattached, or loosly attached, ring around it and the 3 colored lights were mounted on that rotating ring. I think I could see the night sky in the space between the sphere and the ring as it went around.

I was thinking love and peace and I want to meet you, and let me see inside your ship... and it seemed to be in agreement as it approached, I squinted to look for windows in the center sphere. I think I saw some ports or something but they were small and blended with the surface, with all the glare and lights and it being night I could not be sure, but I did feel watched from there.

More than that I felt "telepathed at" or heard... or understood, or "linked to" whoever was there, inside. I felt in a dreamy state.

It was almost as big as a football field, if anyone was really in it they were in the center part, it was about 80 feet up. It took up 30% of the visible sky. My neck was bent back as far as it would go to look up at it. I felt the same feeling you get when you daydream. It felt good, euphoric.

It was going to land, I just knew it. It hovered there for 5 minutes or so, I felt euphoria and I had to concentrate hard to keep thinking clearly and study it, to remember everything, and not fall under its spell. It took effort to keep 'snapping myself out of it'.

The bottom seemed to be mirroring the night sky above it, like it tried to be invisible. I realized it was so close I could hit it with a rock!... or my BB gun, or the 22 rifle behind our back door and make it crash here! and call channel 7 eyewitness news and be famous!

The very next rotation of that glorious ring rotated to the east, away from me... it was leaving! they heard my thoughts! I was already regretting letting my thoughts go from 'peace, land, come here, I want to meet you' to 'get proof and be on TV.'

I ran in the house and the gun was not behind the door where it ALWAYS is. I ran to the living room and yelled for my stepfather to come look, but he wasn't interested. I ran past my mom and back outside. My mom was still frozen at the back door looking up with her mouth hanging open. I knew even then the euphoria had gotten to her, she was mesmerized. Back outside it was really leaving, it slowly did its rotate slide, rotate slide to the east, away from me and my chance to meet them, I blew it. 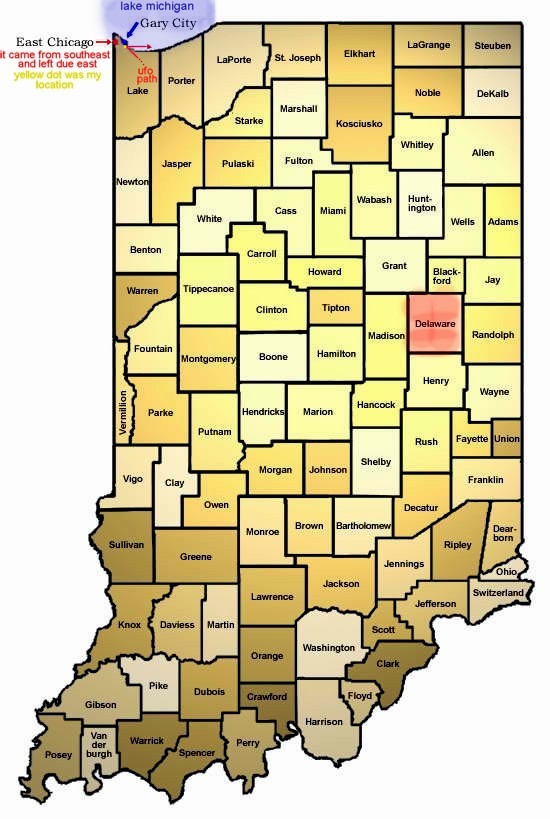 It slowly hula-hooped due east and back over I-65 again, about mile north of where it first crossed west over the interstate, and disappeared into the distance. I felt sad as I watched it another 15 minutes floating away.

I didn't know what to do, I called state police, they said nobody has reported anything, that left me with not much to say. I tried calling a small local airport but nobody answered. It was so low going over I-65 and all the neighborhoods, Willow Street, Old Ridge Road. Surely someone else saw it, all West Hobart should have seen that thing, surely anyone outdoors between Ridgeview Elementary School and I-65.

For the next week I watched the news and read the Post Tribune looking for anything, but nothing. I was never the same after that, maybe there really is a God, I didn't know everything or have a logical explanation for everything anymore.

After all these years I have come to some conclusions. It was held aloft the same way a magnet is when held over another magnet with matching poles facing each other, I could "feel it"... it was not anti-gravity, it was suspended inside the earth's magnetic field somehow, it was manipulating the magnetic fields around itself, silent, smooth, efficient.

But it had lights even though it seemed to try to broadcast the night sky on its' underside. Why cloak itself, but have bright pulsing lights... why would aliens need or care to follow FAA regulations or any earth laws... why have lights at all if you want to sneak?

Was it trying to look like our air traffic? Why come out of your way to look at me and hang out here and let me see you if you are trying to cloak yourself? Did it see the flashes from me throwing matches in the garbage?, it surely went out of its way to come over here and look at me.

It did not want some normal plane or something to crash into it, that's why the lights, that's the only thing that makes sense, or maybe it was just taken for granted when building it that of course anything flying, at night especially, needs lights, right? By humans this logic holds.

I was amazed at the technology of that thing, hundreds of years ahead of mankind if not more!, but I think the lights were man-made, and the more I think about it the more I think it was a UFO for sure, but not from distant space, it was too "mechanical." I doubt that thing could make it from one star system to another no matter how amazing it was compared to a jet or helicopter.

Maybe the original idea or some tech inside it was from outer space, but we were the ones who had it now, reverse engineered. We were the ones "hundreds of years ahead of man kind." Now after seeing the tic tacs with the Pacific fleet, in comparison my old 1973 UFO seems like an old fashioned clunky version, almost a laughable funny flying machine, like how we now look at old black and white movies of early attempts at flight.

Maybe the telepathy thing was just my emotional state. Maybe.

I have included a graphic I made from memory and also a map detailing the exact path the object traveled. In the map I highlighted a county southeast of my location because after looking at many sites and forums for "my" UFO in case someone else saw it, I came across a rash of reports from Delaware County, Indiana at about that same time frame. And the thing I saw came from that exact direction.

Editor's Note: A big thanks to the reader who filed this report. A very detailed and compelling account.