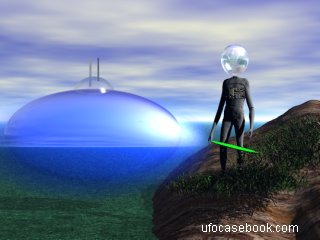 This case was originally brought to light by renown researcher Jacques Vallee, and it is a strange one indeed. Occurring at Nouatre, Indre-et-Loire, France in 1954, it is a case unlike any other, and yet all of the witnesses to the event are considered trustworthy, and their strange sighting has never been debunked.

American ufology students have treated this case with little credibility, but serious investigators have embraced it as genuine. It began at a construction site at 4:30 P.M. on September 30, 1954.

George Gatay, who was foreman of an eight-man construction crew, was unexpectedly drawn away from his crew, feeling a sense of "peculiar drowsiness." He was walking, but did not know why or to where. A short distance from his construction site, Gatay was amazed to encounter a man standing on a slope, some 30 feet from him.

The "man" was wearing an opaque glass helmet with a large visor. He was wearing gray coveralls, and short boots. He also held an object in his hand, which Gatay described as a weapon of some kind, like a rod. There was a kind of electronic instrument display on his chest. This strange looking man was standing in front of a dome-shaped object, which hovered about 3 feet above the ground.

The craft had a cupola with blade-like devices above it. Gatay, enthralled with the sight of the man and his craft, was frozen in his tracks.

Gatay stated: "Suddenly, the strange man vanished, and I couldn't explain how he did it, since he did not disappear from my field of vision by walking away, but vanished like an image one erases. Then I heard a strong whistling sound which drowned the noise of our excavators. Soon the object rose by successive jerks, in a vertical direction, and then it too was erased in a sort of blue haze, as if by a miracle."

Gatay had tried to run after first seeing the being and object, but was "paralyzed" during the sighting. Strangely, his seven co-workers were also in a sort of a daze during the incident. All eight of the men were "non-believers" before their strange incident.

As soon as Gatay was released from his strange encounter, he ran back to the other workers, and cried, "Have you seen something?" One of the men, Mr. Beurrois, exclaimed, "Yes--A flying saucer!"

Another of the men, excavator driver Mr. Lubanovic added, "There was a man dressed like a diver in front of it." The other workers all added their confirmation to the strange event.

Gatay was a well-known and respected man who had fought in the war with the French Resistance, and was wounded in Luxembourg. After the sighting, he began to suffer from insomnia, strong headaches, and a loss of appetite.

These symptoms lasted about a week. Even after this strange sighting, the men collectively believed that they had been witnesses to some type of experimental craft, probably from France itself.

This explanation was not feasible given the details of the hovering of the craft, and the actual vanishing of the craft in front of the men. What was this other-wordly craft seen by these men?

And the being, was it a living entity, or a remotely controlled robot of some type? To this day, no reasonable explanation has been given to answer these questions, and this case is still listed as unexplained.