An extremely compelling and controversial case of alien abduction is that of Linda Napolitano, (originally aliased as Cortile) which was researched by the well-known and respected Budd Hopkins.

Napolitano claimed that she was abducted by the so-called "greys," who floated her from a closed bedroom window into a hovering UFO. The craft was waiting for her above a Manhattan apartment building at about 3:00 A.M. November 30, 1989. Linda's experience, though intriguing, was hampered at first by memory loss. She could recall only bits and pieces of the abduction.

She could remember vividly the actual kidnapping and the room where she was examined, but the transportation process itself was totally lost to her. Further details of the case would be forthcoming via the passage of time, other witness statements, and through regressive hypnosis.

"I'm standing up on nothing. And they take me out all the way up, way above the building. Ooh, I hope I don't fall. The UFO opens up almost like a clam and then I'm inside," said 41 year old (at the time) Linda.

"I see benches similar to regular benches. And they're bringing me down a hallway. Doors open like sliding doors. Inside are all these lights and buttons and a big long table."

"I don't want to get up on that table. They get me on the table anyway. They start saying things to me and I'm yelling. I can still yell. One of them says something that sounds like {Nobbyegg}. I think they were trying to tell me to be quiet because he put his hand over my mouth."

The Linda Napolitano affair is without question one of the best documented alien abduction cases in UFO history. Most of these cases are related to authorities and investigators by a single person. It is extremely unusual to have multiple witnesses, especially those totally unknown to the experiencer, to validate the facts of an alien abduction.

Hopkins did an exceptional job of holding together the case, despite some unusual twists and turns.

Skeptics, as you would expect, dismiss the case without offering any evidence to support their theories, except the commonly used statement, "it can't happen, so therefore it didn't."

In a recent French magazine, La Gazette Forteenne, Issue # 2, 2003, Linda gives an interview that does add some new facts about her case. She mentions a new witness, a New York Post truck driver, who saw the abduction from the Brooklyn Bridge. No name is given

There had also been rumors of the abduction causing a small traffic jam on the intersection between South Street and Catherine Slip. Now, there is a witness who saw the stopped traffic at approximately the same time as the abduction. Linda says:

"At the New York Post complex, a well-known journalist leaves a nearby bar. Too drunk to drive, he asks one of the drivers if he can drop him home. The driver answers that the lorries cannot move because there are several limos blocking the street. He even suspected that the big boss could be paying a visit to the newspaper."

Supposedly, the lead limo was the one carrying Dan, Richard, and Cuellar. Hopefully, more information will be forthcoming in the near future. 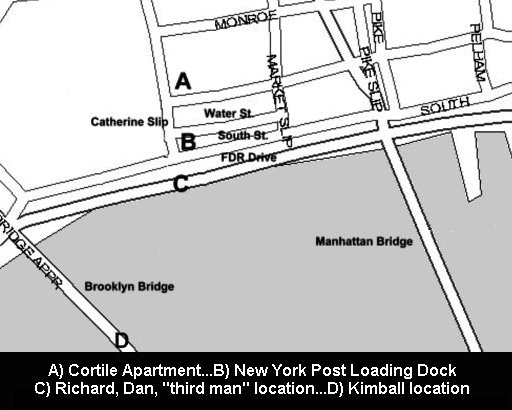