1. Early in the morning of 27 Dec 80 (approximately 0300L), two USAF security police patrolmen saw unusual lights outside the back gate at RAF Woodbridge. Thinking an aircraft might have crashed or been forced down, they called for permission to go outside the gate to investigate. The on duty flight chief responded and allowed three patrolmen to proceed on foot.

The individuals reported seeing a strange glowing object in the forest. The object was described as being metallic in appearance and triangular in shape, approximately two to three meters across the base and approximately two meters high. It illuminated the entire forest with a white light. The object itself had a pulsating red light on top and a bank(s) of blue lights underneath.

The object was hovering or on three legs. As the patrolmen approached the object, it maneuvered through the trees and disappeared. At this time the animals on a nearby farm went into a frenzy. The object was briefly sighted approximately an hour later near the back gate.

Halt took with him a team of specialists which included: Lieutenant Bruce Englund, Sergeant Monroe Nevilles, who operated the Geiger counter, and Master Sergeant Bobby Ball. Halt's team was later joined by Airman First Class John Burroughs, who would become one of the principal figures in the investigation.

Within a short period of time, several other groups of personnel would join the chase through the woods, looking for the source of the strange lights in the forest.

One of the patrolmen, Staff Sergeant Jim Penniston, later reported that, as they neared the object: "The air was filled with electricity. You could feel it on your skin as we approached the object."

After observing the object from a safe distance, Penniston also examined it at close range for some twenty minutes, actually touching the "smooth, black, glass-type fabric" and the strange symbols etched into its surface. Finally, the craft rose upwards and as quoted in the 'Strange But True?' interview, "It slowly started moving back, weaving in and around the trees. It got about 40 feet away, then it raised up into the air and it shot off as fast as you could blink. On the upper left side of the craft, was an inscription. It measured six inches high, of symbols. They looked familiar, but I couldn't ascertain why." 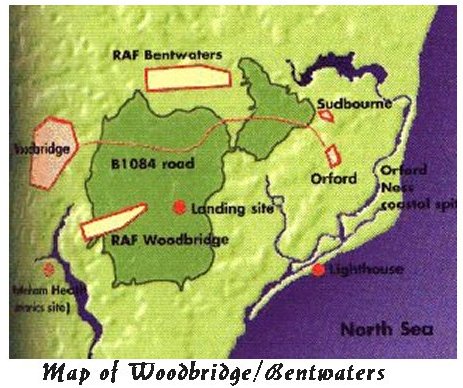 2. The next day, three depressions 1 1/2" deep and 7" in diameter were found where the object had been sighted on the ground. The following night the area was checked for radiation. Beta/Gamma readings of 0.1 milliroentgens were recorded with peak readings in the three depressions and near the center of the triangle formed by the depressions. A nearby tree had moderate (.05 - .07) readings on the side of the tree toward the depressions. Lt. Colonel Halt insisted that an appropriate entry be made in the security police log. Halt's report did not end there, because the next night more activity occurred in Rendlesham Forest.

3. Later in the night a red sun-like light was seen through the trees. It moved about and pulsed. At one point it appeared to throw off glowing particles and then broke into five separate white objects and then disappeared. Immediately thereafter, three star-like objects were noticed in the sky, two objects to the north and one to the south, all of which were about 10° off the horizon.

The objects moved rapidly in sharp angular movements and displayed red, green and blue lights. The objects to the north appeared to be elliptical through an 8 - 12 power lens. They then turned to full circles.

The objects to the north remained in the sky for an hour or more. The object to the south was visible for two or three hours and beamed down a stream of light from time to time. Numerous individuals, including the undersigned (Halt himself), witnessed the activities in paragraphs 2 and 3.

The Halt document, one of the most important papers in Ufology, states that patrolmen on the base encountered a "saucer-like" object in the forest adjacent to the military bases.

Halt describes the craft as maneuvering through the forest's trees, and eventually disappearing into the sky. He further states that the next day's investigation found marks at the spot of the encounter, and abnormal levels of radiation.

On the same night of the event, strange objects were observed performing aerial moves that defied the laws of physics. These lights divided into smaller lights, and eventually disappeared from view.

After years of speculation and theory, Colonel Halt released an 18-minute audio cassette that he states was made on the night of the encounter. On the tape could clearly be heard various senior officers, including Halt, communicating via walkie-talkies, as personnel tramped through the woods investigating the unusual craft.

The voices are at times panic stricken, as they conveyed that a beam from the craft disabled electrical devices in the area for a time. Incredibly, the tape also relates that "video" and "still" photographs were taken of this strange object. Larry Warren also verified that numerous cameras were rolling near the unearthly object.

There is no doubt that this evidence exists today, still kept secret in some government hideaway, though the Ministry of Defence denies this allegation. Despite the overwhelming evidence of a major "unknown" craft landing in the forest that night, interested parties still await more evidence on this amazing case.

Numerous explanations have been offered for the strange sightings at Rendlesham, such as a nearby lighthouse, a satellite reentering earth's atmosphere, weather phenomena, etc. None of these explanations even begin to explain what happened in Rendlesham.

If someday, the video tapes and still photos taken that night are released, undoubtedly an entire new group of UFO believers would be created. The events of Woodbridge and Bentwaters are some of the most important in the history of UFO study, and investigation into these events continues even today.

A transcript of Colonel's tape is available on our website.

In an interview with American journalist Salley Rayl, Penniston added the following descriptions.

"My first impression was that we had an aircraft down. I saw orange, red, and bluish types of glowing light, pretty standard with aircraft crashes. I asked Staff Sgt. Steffans if he had heard it go down. He told me there had been no sound, that it didn't crash, that it had landed. I discounted that and, after assessing in my own mind what to do, decided we should call it in to our superiors at Bentwaters Center for Security Control (CSC)."

"I was still pretty sure it was an aircraft downing at that point, and asked Master Sgt. Chandler for permission to investigate. Chandler contacted the shift commander's office, and within a minute or so I got the go-ahead to proceed off base with two other security policemen."

"As I continued on into the woods, I started seeing the outline of the object itself. The lights that had just been a blur from 300 meters away were now definite, distinct colors -- light blue, yellow, and red -- and they were pulsating."

"Looking at the silhouette of the object, I realized it was not a conventional aircraft, meaning that it was not one that was already published in Jane's All the World's Aircraft. As I was taking notes, I also memorized what was in front of me for what seemed like hours, but was in fact only minutes. Finally, I unleashed my camera-case cover and brought the camera up to focus. The air was electric. It made my hair and skin feel as if I were surrounded by static electricity or some type of energy. I began snapping photo after photo"

"I got to within 10 feet of the craft and the clearing where it sat. I estimated it to be about three meters tall and about three meters wide at the base. No landing gear was apparent, but it seemed like she was on fixed legs. I moved a little closer. I had already taken all 36 pictures on my roll of film. I walked around the craft, and finally, I walked right up to the craft. I noticed the fabric of the shell was more like a smooth, opaque, black glass. The bluish lights went from black to gray to blue. I was pretty much confused at that point. I kept trying to put this in some kind of frame of reference, trying to find some logical explanation as to what this was and what was going on."

"On the smooth exterior shell there was writing of some kind, but I couldn't quite distinguish it, so I moved up to it. It was three-inch lettering, rather symbols that stretched for the length of two feet, maybe a little more. I touched the symbols, and I could feel the shapes as if they were inscribed or etched or engraved, like a diamond cut on glass."

"I backed away from the craft, because the light was starting to get brighter. Still, there was no sound. There was no physical contact with any kind of life form, but there did seem to be a life presence. It was mechanical, this ship, and it seemed to be under intelligent control". "The craft moved up off the ground, about three feet, still with absolutely no sound. It started to move slowly, weaving back through the trees at a very slow pace, maybe a half a foot per second. It took about a couple of minutes for it to manoeuvre itself back to a distance of about 100 to 150 feet, then it rose up just over the trees, about 200 feet high. There was a momentary pause -- and then literally with the blink of an eye it was gone. All with no sound. That still boggles my mind."