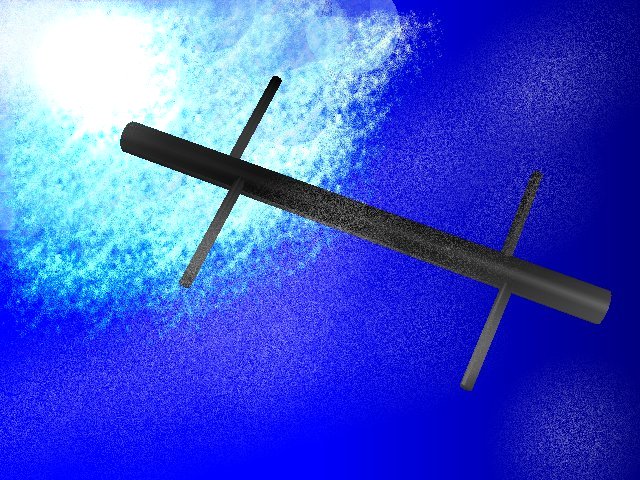 This particular article is based on events that occurred between 10-20-02 and 10-29-02. Some of the information comes from "unspecified sources." These sources are noted only for their efforts and contributions. Their efforts are appreciated, and all of their information was later confirmed. Their anonymity is always sacred with the UFO Casebook. The events discussed below are somewhat atypical by today's standards, but the answers will become clear as we go along. Members of the UFO Casebook Forum who contributed to this report are appreciated. They know who they are. As always, a big thanks to the UFO Reporting Center's Peter Davenport for their tireless and ardent search for the truth. (B J Booth)

At 07:30 hrs. (Pacific) on Monday morning, October 21, 2002, the National UFO Reporting Center received a telephone call from a television news reporter, Mr. Dan Bazile, with FOX 23 news (a Clear Channel Communication-owned station), who apprised us that one of their photographers had inadvertently captured brief footage of a very bizarre object streaking across the sky near Albany, NY.

He described that one of their photographers had been out on Sunday afternoon, October 20th, photographing aircraft at a nearby airport, and that the peculiar object had been detected in the news studio when the footage was being examined at slow speed.

From that first telephone conversation, NUFORC was not left with a clear understanding of the nature of the object and its appearance, but Mr. Bazile offered to forward to NUFORC still images from the tape. NUFORC offered to help identify the object, if possible, and to put the station in touch with photo analysts, who might be able to assist in further analysis.

In a second conversation with Mr. Bazile on Tuesday morning, October 22, he apprised NUFORC that the original video tape of the object had been forcibly "confiscated" from the "young photographer" by "four FBI agents," from the Albany, NY, FBI offices, a statement which now is in question. {or had been changed, B J} p> Mr. Bazile went on to describe how the agents had invited the photographer outside the station, and that the agents had then "taken" the "original" tape from the photographer, who had it on his person at the time of the meeting with the FBI personnel.

When NUFORC suggested that such an act, in the absence of a court warrant, might be illegal, Mr. Bazile averred that he agreed with that assessment.

However, he stated that the station still had in its possession several copies of the original tape.

{Shortly after these events, I received my first report of this event. I was told that the video was briefly on the Fox 23 News station, but had been removed. This certainly got my attention.

The video had made it's way to www.rense.com, and I tried to download it, which I did, but the file would not play. I subsequently received the video file from one of my sources, and immediately uploaded it to my domain in two formats, quicktime and real.

When NUFORC asked Mr. Bazile whether FOX 23 was planning to do a news report on the incident with the FBI, he responded that the station was "considering" that possibility, but such a decision was out of his hands.

He then stated that in order to answer that question, he would like first to speak with his "supervisor" about the matter, and that he would call back "in a few minutes."

After approximately 45 minutes had elapsed, NUFORC telephoned FOX 23 and requested to be put in touch with Mr. Bazile. After a short period of time, he came on the line, but after only a very short conversation he said he would like to put his supervisor, Mr. Dave Brown, Station News Director for FOX 23, on the line.

During our 7-minute conversation with Mr. Brown, he stated that a copy of the tape had been provided to the personnel from the FBI by his station voluntarily, because his station "willingly co-operated with members of law enforcement." He added that he personally had provided the video to the FBI, that it had not been "taken" by them, as had been suggested by Mr. Bazile. Mr. Brown stated that he had arrived at work on Sunday evening "at about 8 or 9 o'clock," and that FBI personnel had been photographed in the station while they watched the tape, and that that footage had been aired by the station on Sunday night as a news report. Mr. Brown implied that this fact illustrated that there had been no "mystery" surrounding the FBI's interest in the footage, and that, in his opinion, no impropriety surrounded the transfer of the tape to the FBI personnel.

{I received the information on this video from one of my sources late on the 21st of October. Since then, I have done everything I could to find the video. This was the first post made on the event at the Fox 23 News.}

ALBANY -- FOX TV News reported on October 21, 2002, that a spear shaped object was caught on film passing above Albany International Airport during daylight hours as a commercial aircraft landed at the airport. The spear shaped object was moving at high speed and could be mistaken for a missile, but none was known to have crashed. The FBI is attempting to determine the cause of the video sighting.

When I saw the acronym FBI, I knew the information would be squashed. I ran a site search for more information and got this message:

Overwhelming demand has crashed our video servers, so in the meantime here are stills from that video.

If you sign up for FOX23 eNews Breaking News, an e-mail will be sent out as soon as video has been restored to our website.

I also sent a request via email to the station news manager, so far no reply.

Mr. Brown also added that he did not know whether the original tape had been provided to the FBI, or whether they had received a copy. However, he said that with digital tape, it really did not matter, since very little fidelity was lost in a copied tape.

He said there might have been more, but he could not be certain, since "there were so many people present in the station that night."

Mr. Brown closed the conversation with the statement that FOX 23 would not be devoting any more news coverage to the footage, suggesting that the story was now old news, and that, in his opinion, it did not warrant any further attention by his station.

Following our conversation with Mr. Brown, NUFORC contacted the FBI offices in Albany [(518) 465-7551]. We spoke with Lisa Massaroni, a public affairs spokeswoman, who apprised us that to the best of her knowledge, the FBI office did have a copy of the tape, that their personnel were planning to analyze it, but that she did not know the status of the investigation.

She directed us to her supervisor for any further questions, and added that he would be out of his office until October 24th.

NUFORC also was contacted by a gentleman from Birmingham, AL, Mr. Brian Huff, a forensic video analyst, who had captured the video from the FOX 23 website, and who has analyzed the tape. We provide elements of his video analysis with this statement.

Mr. Huff has stated to NUFORC that, based on his analysis of the footage, the object is genuine, and that it is not a superimposed image. He also stated that the object is on the other side of the clouds, which provides some perspective as to the size of the object, and its velocity, which Mr. Huff concludes is considerable.

We extend our gratitude to Mr. Huff for sharing his analysis with NUFORC and Jeff Rense.

Goal 1 - Verify authenticity of video with respect to object as an original embedded component.

Goal 2 - Clarify shape and size for analysis and comparison.

Goal 3 - Establish that object is not of the nature of a small "close proximity "rod" (as identified in the research of Jose Escamilla -ed) or insect illusion.

Direct color inversion of non-enhance video still. Objects in the atmosphere generally reflect the color of their environment-and appear somewhat as monochromatic images.

Direct color inversion is useful for detecting overlays, pasting, chromakey, and other methods used to "fake" photo and film.

An authentic image should invert to an alternative pseudo-monochromatic color scheme, with no obvious foreign colors or anmalies-sharp lines, etc.

Object defined by contrast increase 61% and brightness reduction of 18%.

Similar to traditional techniques of sharpening images, but appling sharpening to each pixel irrespective of that pixels "nearest neighbor" pixelation.

From a source, I received this message:

ONE OF OUR VIDEOGRAPHERS WAS SHOOTING A PLANE TAKING OFF FROM THE ALBANY INTERNATIONAL AIRPORT - AT THE SAME TIME THE STRANGE OBJECT STREAKED THROUGH THE SKY - IT WAS MOVING SO FAST, HE DIDN'T EVEN SEE IT, UNTIL HE PLAYED HIS TAPE IN SLOW MOTION.

WE'RE TOLD THE OBJECT DID *NOT SHOW UP ON RADAR. AUTHORITIES WILL CONTINUE TO ANALYZE THE VIDEO TO FIGURE OUT WHAT THE FLYING OBJECT IS. WE'LL KEEP YOU POSTED

1) Direct color inversion of non-enhance video still. Objects in the atmosphere generally reflect the color of their environment-and appear somewhat as monochromatic images. Direct color inversion is useful for detecting overlays, pasting, chromakey, and other methods used to "fake" photo and film. An authentic image should invert to an alternative pseudo-monochromatic color scheme, with no obvious foreign colors or anmalies-sharp lines, etc.

2) Object defined by contrast increase 61% and brightness reduction of 18%.

4) Similar to traditional techniques of sharpening images, but appling sharpening to each pixel irrespective of that pixels "nearest neighbor" pixelation.

Thanks to the UFO Casebook Team...