The Battle of Los Angeles, Part 2

Explosions stabbing the darkness like tiny bursting stars... Searchlight beams poking long crisscross fingers across the night sky...Yells of wardens and the whistles of police and deputy sheriffs...The brief on-and-off flick of lights, telephone calls, snatches of conversation: 'Get the dirty...' That was Los Angeles under the rumble of gunfire yesterday.

Sleepy householders awoke to the dull thud of explosions... "Thunder? Can't be!" Then: "Air Raid! Come here quick! Look over there...those searchlights. They've got something...they are blasting in with anti-aircraft!" Father, mother, children all gathered on the front porch, congregated in small clusters in the blacked out streets -- against orders. Babies cried, dogs barked, doors slammed. But the object in the sky slowly moved on, caught in the center of the lights like the hub of a bicycle wheel surrounded by gleaming spokes.

Speculation fell like rain. "It's a whole squadron." "No, it's a blimp. It must be because it's moving so slowly." "I hear planes." "No you don't. That's a truck up the street." "Where are the planes then?" "Dunno. They must be up there though." "Wonder why they picked such a clear night for a raid?" "They're probably from a carrier." "Naw, I'll bet they are from a secret air base down south somewhere." Still the firing continued. Like lethal firecrackers, the anti-aircraft rounds blasted above, below, seemingly right on the target fixed in the tenacious beams. Other shots fell short, exploding halfway up the long climb. Tracers sparked upward like roman candles. Metal fell. It fell in chunks, large and small; not enemy metal, but the whistling fragments of bursting ack-ack shells. The menacing thud and clank on streets and roof tops drove many spectators to shelter. 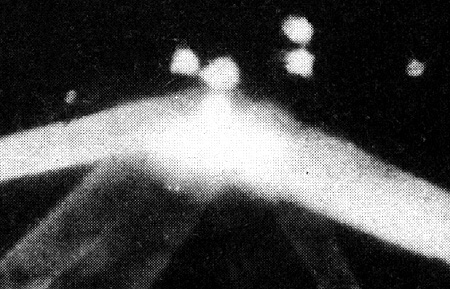 Close up view of large UFO

Wardens were on the job, doing a good job of it. "Turn off your lights, please. Pull over to the curb and stop. Don't use your telephone. Take shelter. Take shelter." On every street brief glares of hooded flashlights cut the darkness, warning creeping drivers to stop. Police watched at main intersections. Sirens wailed enroute to and from blackout accidents. There came lulls in the firing. The search lights went out. (To allow the fighter planes to attack?). Angelinos breathed deeply and said, "I guess it's all over." But before they could tell their neighbors good night, the guns were blasting again, sighting up the long blue beams of the lights.

The fire seemed to burst in rings all around the target. But the eager watchers, shivering in the early morning cold, weren't rewarded by the sight of a falling plane. Nor were there any bombs dropped. "Maybe it's just a test," someone remarked. "Test, hell!" was the answer. "You don't throw that much metal in the air unless you're fixing on knocking something down." Still the firing continued, muttering angrily off toward the west like a distant thunderstorm. The targeted object inched along high, flanked by the cherry red explosions. And the householders shivered in their robes, their faces set, watching the awesome scene. 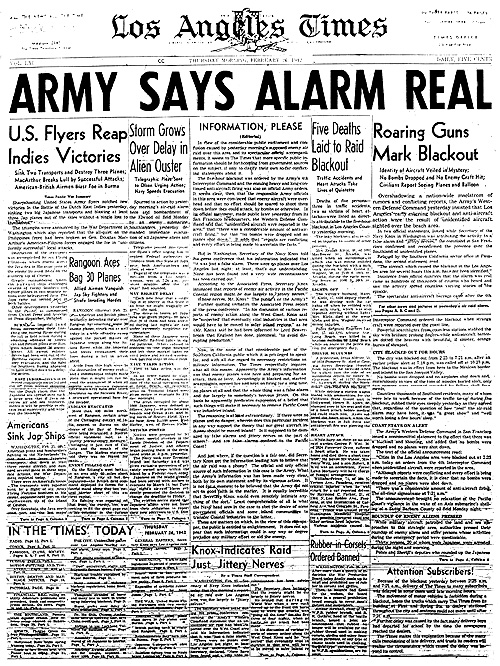 Identity of Aircraft Veiled in Mystery; No Bombs Dropped and No Enemy Craft Hit; Civilians Reports Seeing Planes and Balloon

Overshadowing a nation-wide maelstrom of rumors and conflicting reports, the Army's Western Defense Command insisted that Los Angeles' early morning blackout and anti-aircraft action were the result of unidentified aircraft sighted over the beach area. In two official statements, issued while Secretary of the Navy Knox in Washington was attributing the activity to a false alarm and "jittery nerves," the command in San Francisco confirmed and reconfirmed the presence over the Southland of unidentified planes. Relayed by the Southern California sector office in Pasadena, the second statement read: "The aircraft which caused the blackout in the Los Angeles area for several hours this a.m. have not been identified." Insistence from official quarters that the alarm was real came as hundreds of thousands of citizens who heard and saw the activity spread countless varying stories of the episode. The spectacular anti-aircraft barrage came after the 14th Interceptor Command ordered the blackout when strange craft were reported over the coastline. Powerful searchlights from countless stations stabbed the sky with brilliant probing fingers while anti-aircraft batteries dotted the heavens with beautiful, if sinister, orange bursts of shrapnel.

City Blacked Out For Hours

The city was blacked out from 2:25 to 7:21 am after an earlier yellow alert at 7:18 pm was called off at 10:23 pm. The blackout was in effect from here to the Mexican border and inland to the San Joaquin Valley. No bombs were dropped and no airplanes shot down and, miraculously in terms of the tons of missiles hurled aloft, only two persons were reported wounded by falling shell fragments. Countless thousands of Southland residents, many of whom were late to work because of the traffic tie-up during the blackout, rubbed their eyes sleepily yesterday and agreed that regardless of the question of how "real" the air raid alarm may have been, it was "a great show" and "well worth losing a few hours' sleep." The blackout was not without its casualties, however. A State Guardsman died of a heart attack while driving an ammunition truck, heart failure also accounted for the death of an air raid warden on duty, a woman was killed in a car-truck collision in Arcadia, and a Long Beach policeman was killed in a traffic crash enroute to duty. Much of the firing appeared to come from the vicinity of aircraft plants along the coastal area of Santa Monica, Inglewood, Southwest Los Angeles, and Long Beach.

I'm a WWII veteran. Just thought I'd let you know that I was an eyewitness to the event back in February of 1942. I was 14 at the time, living in the Adams and Crenshaw area of Los Angeles. My family and I observed the entire episode through the large bay window of our home facing west.

The air raid sirens awoke us at 2 AM. There was a period of silence following that, then the thumping of antiaircraft fire. The northwest sky was lit up with bursting shells and searchlights. The action was moving south along the coastline. I remember distinctly the convergence of searchlights reflecting off the bottom of some kind of slow moving objects, apparently flying in formation. They seemed to be completely oblivious and impervious to the shells exploding around them.

I was quite the aviation buff back then, as I am now, but I must admit that I had a devil of a time trying to identify the objects, what with the awe, excitement and speculation of the moment, the bursting shells, tracers, etc. I was surprised in the days that followed to discover that with all that aggressive firepower there was no evidence that we had brought anything down.

We were looking in a westward direction from our large living room bay window which gave us an unobstructed panorama of view facing the northwest, west and southwest. We then went to our south-facing kitchen and porch windows to observe the action where it culminated in the south. Ergo, the action followed the coastline.

It could have been two, or three, or up to six miles away, I can't recall exactly since it occurred so long ago. But I strongly remember the searchlights converging on the bottoms of the reddish objects flying in formation

I was an eye-witness to the events of that unforgettable February morning in February of 1942. I was eight-years-old at the time, and my parents lived at 2500 Strand in Hermosa Beach, right on the beach. We thus had a grandstand seat. While my father went about his air-raid warden duties, my late mother and I watched the glowing object, which was caught in the glare of searchlights from both Palos Verdes and Malibu/Pacific/Palisades and surrounded by the puffs of ineffectual anti-aircraft fire, as it slowly flew across the ocean from northwest to southeast.

It headed inland over Redondo Beach, a couple of miles to the south of our vantage point, and eventually disappeared over the eastern end of the Palos Verdes hills, what's today called Rancho Palos Verdes. The whole incident last, at least from our perspective, lasted about half an hour, though we didn't time it.

Like other kids in the neighborhood, I spend the next morning picking up of pieces of shrapnel on the beach; indeed, it's a wonder more people weren't injured by the stuff, as we were far from the only folks standing outside watching the action.

In any case, I don't recall seeing any truly discernable configuration, just a small, glowing, slight lozenge-shaped blob light-a single, blob, BTW. We only saw one object, not several as some witnesses later reported. At the time, we were convinced that it was a "Jap" reconnaissance plane, and that L.A. might be due for a major air-raid in the near future.

Remember, this was less than three months after Pearl Harbor. But that of course never happened. Later on, we all expected "them," that is, the Military, to tell us what was really up there after the war. But that never happened, either...