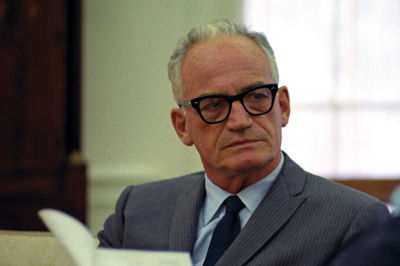 The "caller" in the following transcript is ParaNet member Rick Dell'Aquila of Ohio. This is verbal confirmation from the Senator himself of the famous "Blue Room" incident, which heretofore we only knew about from his letters and from an interview in a questionable publication.

CALLER: Hello Senator Goldwater, I've heard in the past that you have an interest in UFOs. I just finished a book called, "Above Top Secret," by Timothy Goode, where three or four of your letters are quoted concerning your attempts to enter Wright-Patterson Air Force Base.

CALLER: Do you believe that the government is withholding information on UFOs?

SENATOR GOLDWATER: Yes I do. But I don't know enough about the subject involving Wright-Pat. to form any opinion. I remember when I first tried to get into that room out at Wright-Pat. and I went to General Curtis LeMay, an old friend of mine, and asked him.

He used some pretty plain language and in effect, told me to "go to hell" and...

LARRY KING: That's the room where they are rumored to have aliens?

SENATOR GOLDWATER: Well, its a storage room where they are supposed to have some of the evidence they've collected relative to Unidentified Flying Objects. I have never...I wouldn't argue against them.

I wouldn't argue for them. My only thinking on it is this planet of ours is one of several billion planets in this universe. I can't believe that God or whomever is in charge would put thinking bodies on only one planet.

So I'm a firm believer that something can fly around here that the Wright Brothers didn't have anything to do with.