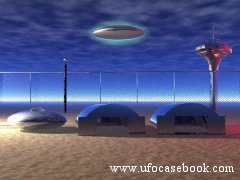 This is just one of many cases which my group (Nuclear Connection Project) has listed under nuclear connection. We have found about 200 such incidents. Not only that, but this event occurred during one of the most intense sighting waves in history.

On March 5, 1967, Air Defense Command radar tracked an unidentified target descending over the Minuteman missile silos of the 91st Strategic Missile Wing at Minot AFB, ND. Base security teams quickly converged on the area and saw a metallic, disc-shaped craft ringed with bright, flashing lights moving slowly. The disc stopped and hovered about 500 feet (150 meters) off the ground, as security police held their fire and watched in awe.

F-106 fighter-interceptors were standing by on the flight line, waiting impatiently for an order from NORAD to scramble. When the or order was not fortthcoming, base operations decided on their own to scramble the interceptors. At that moment the UFO climbed straight up and streaked away at incredible speed.

Another civilian representative assigned to Grand Forks AFB, North Dakota, told me that an Air Force major friend of his got a good close look at a completely unconventional craft maneuvering in the area between the air base and missile site. As he got out of his car and approached it, it took off at tremendous speed. Superiors ordered him not to talk about the incident.

On March 5, 1967, just 15 days prior to the Malmstrom AFB incident, the 91St Strategic Missile Wing at a sister base also had an unwelcome visitor. Aerospace Defense Command radar tracked an unknown target descending over the Minuteman missile installations at Minot AFB, North Dakota. strike teams were alerted and sighted a metallic disc- shaped craft ringed with bright flashing lights moving slowly over the supersensitive area.

Three armed teams in fast trucks pursued the alien vehicle as it maneuvered and finally stopped and hovered 500 feet off the ground. The strike teams held their fire. They had orders to capture it undamaged if it should land.

Then abruptly it began moving once again and circling directly over a launch control facility.

Back at Minot, F-106 fighter planes were awaiting orders from the North American Air Defense Command to launch an attack. Base operations became impatient and had just decided to scramble the jets without confirmation. Suddenly the UFO climbed straight up and streaked away at incredible speed.

SW. of Minot ND. An MP. got a call to one of the missle silos. The Sargent on duty took two other men with him. He told me that they had come over to see a UFO over the silo. The guards at the silo were like statues. the locks on the gates were open, and gates open. The sargent had contact with the officers down in the silo.

They were very upset, it seems that the missle had been armed and unlocked in launch mod, and that the warhead was armed.

Minot Air Force Base, History
In the early 1950s, as the Cold War was warming up, military leaders feared a possible threat of northern attack of the North America by enemy bombers. Air Force Leaders began looking for possible sites for air bases in the northern United States. The city of Minot sold the Air Force on becoming a site for a new base in 1954.

The following year Minot businessmen and citizens donated approximately $50,000 to buy the first portions of land for the base. The ground breaking took place July 12, 1955, and construction started shortly after.

The base started out as a Air Defense Command (ADC) Base and the first unit was the 32d Fighter Group, activated on Feb. 7, 1957. The Air Force took up occupancy eight days later on Feb. 15.

There was a small ceremony in front of base Ops when the Army Corp. of Engineers officer turned over the key to the base to the first base commander Major Joe E. Roberts.

Personnel celebrated the first church service in July 1958, and the Base Exchange opened in Sept. 1958. That same year, Air Defense Command established a Semi-Automatic Ground Environment (SAGE) sector at Minot AFB, it was construction of a huge, windowless blast-resistant concrete building.

IBM engineers installed two large, 275-ton computers in the basement of the building.

The first permanent Strategic Air Command (SAC) unit assigned to Minot AFB was the 4136th Strategic Wing in September 1958 and within six months, the 906th Air Refueling Squadron was activated and assigned to the 4136th. They provided air refueling support to northern defense operations. The first KC-135A Stratotanker, dubbed "Miss Minot," arrived September 23, 1959. In addition, there was one U-2 aircraft stationed on base for 18 months as part of "Operation CROWFLIGHT."

In late January 1960, the 32d Fighter Group brought the first F-106 Delta Dart to Minot. The F106's were assigned to the 5th Fighter Interceptor Squadron (FIS) which was transferred to Minot from Suffolk County Airport, New York on February 1, 1960.

An interesting thing about the Fifth, was their mascots, two live lynx kittens that produced several offspring which were kept on base. The scope of operations grew as the Air Force assigned the 525th Bombardment Squadron to the 4136th. In July 1961, the first B-52H Stratofortress, named "Peace Persuader," arrived on base and within five months the base received its first Hound Dog Missile to give the B-52 its first stand-off capability

Also in 1961, the Air Force selected the land around Minot for a new Minuteman I Intercontinental Ballistic Missile (ICBM) complex. Field construction began on the missile complex in January 1962.

SAC activated the 455th Strategic Missile Wing (SMW) in November 1962, and in less than a year, on September 9, 1963, the first Minuteman I Missile arrived from Hill AFB, Utah. It was placed in Launch

Facility A-02, September 9, 1963. Within a short 28 months, in April 1964, the 455th became combat ready. The amber waves of grain over the North Dakota plains were implanted with a combat ready ICBM system born of the latest American technology.

As SACĺs mission continued to grow at Minot, ownership passed from ADC to SAC. As Minot's mission changed, the SAGE center was deactivated in May 1963 and eventually housed numerous base agencies and today is known as the Professional Results In Daily Endeavors (PRIDE) Building.

Force modernization characterized Minot AFB during the 1970s. The Air Force selected the 91 SMW to become the first wing to convert to the Minuteman III ICBM. The Minuteman III tripled the striking power and enhanced the credibility of the SAC deterrent force.

The 741st Strategic Missile Squadron became the first operational Minuteman III squadron in December 1970, and the entire wing converted by December 1971. The 5 BMW added the Short Range Attack Missile (SRAM) to its arsenal in September 1973, and later equipped its bombers with an improved offensive avionics system for more accurate bombing.

Following the 1980 Iran hostage crisis, SAC tasked the 57th Air Division (AD), which had been on base since the mid 70's, to organize the Strategic Projection Force (SRF). The 57 AD became the first division in SAC to implement this concept.

The 5 BMW's B-52H fleet became the spearhead of this force, able to provide conventional warfare anywhere in the world. In the late 1980's the 57 AD became the host unit, providing logistical, security, administrative and other support services to the 5 BMW, 91 SMW and tenant organizations.

In the mid 80's the 5th Fighter Interceptor Squadron converted from the F-106 to the F-15 Eagles. The F-15s only flew over Minot until the spring of 1988, when the 5 FIS was deactivated.

After the unit inactivated, their mascots, two of the lynx kittens were donated to the Roosevelt Park Zoo in Minot, where they're still living today.

In 1988, the Air Force selected Minot AFB for the Commander-in-Chief's Installation Excellence Award. This presidential award recognizes those military installations that combine mission excellence with a concern for people to produce working and living conditions truly above other installations.

Closing out the 1980s Minot continued to answer America's strategic needs. Rivet MILE, the Minuteman Integrated Life Extension program, is a nine-year modification program for missile support systems and facilities. It will maintain the Minuteman III as an effective deterrent into the next century. The 5 BMW continued to modernize in October 1989, when they added the Air Launched Cruise Missile (ALCM) to their arsenal.

Entering the 1990s, Minot AFB demonstrated its war-fighting capabilities by deploying aircraft and personnel to the Middle East for the overwhelming victory over Iraq during Operation DESERT STORM. After the war, the base prepared for changes as the Air Force directed a major reorganization. In June 1991, the 57th Air Division was inactivated and the 5th Bomb Wing (BW) assumed host base responsibilities.

As the "Cold War" came to an end, 5th Bomb Wing's aircraft came off alert status in September 1991, after 35 years of continuous alert. In June 1992, the newly formed Air Combat Command (ACC) replaced Strategic Air Command (SAC) as host command. Both the 91st and 5th fell under the newly formed ACC. The following summer the 91st was reassigned to Air Force Space Command.

The 5 BW gained the Advanced Cruise Missiles (ACM) for the B-52 in the spring of 1993. In January 1994, the base lost one of its oldest units, the 906th Air Refueling Squadron. The final KC-135 departed Minot three months later. The 91st Missile Wing (MW) completed its first major upgrade on the command, control, and communication systems of the Minuteman III ICBMĺs launch and control centers in August 1996.

They did it with the new Rapid Execution and Combat Targeting (REACT) upgrade program. The 91 MW continues to modernize their Missile Alert Facilities (MAF) through "Alert Imaging."

A continuing event for the base is the Strategic Arms Reduction Treaty (START).

Minot AFB has undergone many changes throughout the years, but one thing remains constant -- Team Minot spirit continues to reign, re-emphasizing the truth that "Only the Best Come North."