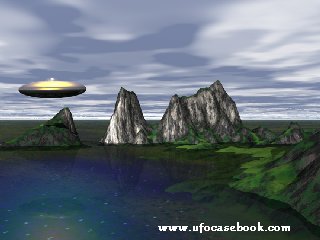 First of all I would like to start out by saying that all I know is what I read. I have absolutely no insider information on anything related to the legend of the Philadelphia Experiment, ETs or UFOs. While that may be true, I do get gut-feels on things and the purpose of my letter is to relate these feelings.

While I will always describe the Philadelphia Experiment (PE) as a legend, if there is truth to this legend, I believe that it is the central, focal point regarding the reported stories concerning ETs.

I have included a section of Brad Steiger's book on PE which I would recommend as one of the books to read several times cover-to-cover. This section potentially uncovers some myths. These include the following:

o The first "Treaty" was not with Truman, but rather with FDR. This, to me, makes sense because the United States was in a very vulnerable position with the threat of Nazi Germany. FDR would be at a point of desperation willing to trade "alien technology for certain planetary privileges". I might add that the "treaty" certainly was not legal because it did not abide by the terms of the US Constitution. Therefore, this "treaty" does not need to be recognized by other alien confederations.

The "treaty" was made with the "K-Group". I believe we need to be careful here because it is not species that we are dealing with but rather confederations. To check out what confederation is being dealt with is to identify the character and actions of a given group. Both the Pleiadean Confederation and the NU (Galactic) Confederation believe in and adhere to the law of noninterference. Therefore, they would not exchange anything for technology until a planet has evolved to the stage where it could handle that technology. Even in 1996 the inhabitants of this Earth, in general, have a considerable way to go to become law-abiding and respecting the rights of others. What I mean by this is that I believe that the Law regarding the rights of other people needs to be written in a person's mind and heart so that the actions of that person coincide with the belief structure. Now, when we talk about the "K-Group" appearing human, that does not make them the good guys, for the Draco Confederation has people who appear to be quite human. Since this "treaty" would break the law of noninterference, there is only one group that does that, and that is the Draco Confederation. The Draco Confederation is also called the Leverons or Orions. I recognize that this gets complex because of the number of names involved; but if we just keep looking at character, we can identify the good guys from the bad guys. Thus, I believe it is a myth to presume that any ET species by itself is either good or bad, and that just because one might be dealing with an ET species that looks human does not necessarily mean that the ET is either trustworthy or honorable.

o There has also been a myth that we had no choice but to make such a "treaty". You will note in what is stated below that Bielek stated that FDR met with the Pleiadean group first. Since the Pleiadean group was not going to violate the law of nonintereference and exchange technology for anything, they were passed over in favor of the "K-Group" which undoubtedly represented Draco.

As an aside, from what I read and my gut feel, the law of noninterference is very meaningful to the two ethical confederations. This law probably is not necessarily simplistic but rather complex just like most of the laws we have here in the U.S.

The following comes from the book, The Philadelphia Experiment and Other UFO Conspiracies, by Brad Steiger. This portion is the beginning of chapter six called Ripping A Hole In Hyperspace.

When the Eldridge dematerialized in 1943, it ripped an enormous "hole" in Hyperspace, "forty years wide," according to Al Bielek.

"This tremendous tear in time allowed a vast contingent of aliens to enter our space-time continuum," Bielek said. "At first I thought this had just been a peculiar side-effect or by-product of the experiment. Now I understand that the whole thing was a set-up."

Bielek's voice takes on the tone of one annoyed by an unpleasant memory: "Extraterrestials. The whole Philadelphia Experiment was set-up by an alien group that had met with President Franklin Delano Roosevelt in 1934."

Whoa! Roosevelt? FDR? We all know about the allegations that President Harry S. Truman set up the secret study group known as MJ-12, but now we're talking about a meeting with a U.S. President and aliens that allegedly took place thirteen years earlier.

Bielek is adamant: "Yes, FDR met with aliens somewhere in the mid-Pacific--I believe it was on board the Pennsylvania. He signed an agreement that would exchange alien technology in return for certain planetary privileges."

Was this treaty with the "Grays," the large-eyed, insectlike entities that have become popular extraterrestial villains in the UFO Abduction cases circa 1965-'90 (and especially after Whitley Streiber's best-selling book, Communion, in 1987)?

Bielek is certain that the so-called "Grays" were not involved in this particular agreement.

"The treaty was made with a group that I'll just label the `K-Group,'" he continued. "These aliens can pass for humans, although their skin tend to have a slightly greenish tint. Because of this tendency, they often `bleach' their epidermis white in order to pass among us as human beings."

Bielek reflected that FDR had been "mildly psychic" and quite interested in other-worldly subjects. On occasion, his wife Eleanor was known to have sought the counsel of astrologers. "The meeting between FDR and the aliens had been set up by Nicola Tesla, who had himself been in contact with alien intelligence since the late 1920s and the early `30s, ever since he created the huge radio receivers for RCA."

Bielek commented on the peculiar fact that although the genius Tesla had been communicating with entities from the Plaiades, who appeared to be completely human, issuing from the same original stock as homo sapiens, the meeting arranged for FDR was with a Pleiadean group first, then later with the "K-Group," a "nearly" human species.

Almost immediately after the President of the United States signed the treaty of mutual noninterference, our science enjoyed a remarkable acceleration of theory and application on nearly all levels of material application.

Go to Part 2
BACK to CASEBOOK HOME PAGE