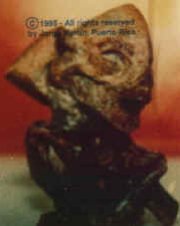 In the very late 1970s, Puerto Rican UFO investigator Jorge Martin came forward with details of an amazing account of the discovery of an Alien corpse. Martin was regarded with high esteem by the UFO community, and his story was subsequently published by Michael Hesemann in Magazin 2000, No. 109, February, 1996.

Martin fought hard to unravel the maze of information and disinformation surrounding the events on the island. He spent two years on this case of a lifetime for a UFO investigator.

The haunting details of Martin's story took place in a mysterious area of Puerto Rico called "Tetas de Cayey," or Twin Mountain Peaks. Two young boys were having a youthful adventure during a night time fishing trip, during which they investigated a series of caves in the area.

Jose Chino Zaya and his friend were suddenly frightened to death by the appearance of several small beings who were making one of the caves their temporary home.

According to Zaya, one of the small creatures grabbed him by the leg. He quickly picked up a stick and hammered the creature over the head, killing him. Having an elementary knowledge of science, Zaya took the being home, preserving it in formaldehyde. A few days later, he felt compelled to report the incident to the local Police Department in Las Ochentas, near Salinas.

Officer Osvaldo Santiago was assigned to the case. He visited Jose, and examined the strange, unearthly looking being. Jose was beginning to have second thoughts about his decision to bring the dead being home with him, and requested that Santiago take the body with him.

Jose admitted that he was afraid that the other beings would come looking for their dead companion. Santiago could not keep the details from his wife, who in turn, related the strange events to a well-known businessman of the area, who requests anonymity.

This unnamed businessman immediately came to see the alien, and took a number of photographs, some of which are show here. The business man soon contacted Professor Calixto Peres, a chemist on the staff of the University of Puerto Rico for his expert opinion. After a thorough examination of the being, he made this statement:

"In my opinion it is something extraterrestrial. Its cranium is far too big for the body, which is small and skinny, and its eyes were too big."

Measurements taken of the being showed a length of slightly over 12 inches. Its body was extremely thin, and its skull was almost destroyed from the blow on the head.

There is only speculation as where the body is today, and the mystery of the Puerto Rican being is ongoing until more facts can be found.