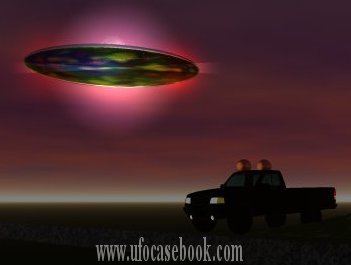 California Highway Patrol Officers Charles A. Garson and Stanley Scott were patrolling on Hoag Road, east of Corning, California when they saw what looked like a huge airliner descending from the sky in front of them. Thinking that a plane was about to crash, they stopped and got out of the car to get a better look.

At this time it was clearly visible to both of us. It was surrounded by a glow making the round or oblong object visible. At each end, or each side of the object, there were definite red lights. At times about five white lights were visible between the red lights. As we watched the object moved again and performed aerial feats that were actually unbelievable.

The officers radioed the Tehama County Sheriff's Office and asked Deputy Clarence Fry to contact the local Air Force radar station at Red Bluff. Deputy Fry reported back that the radar station verified that an unidentified object was visible on radar.

As they continued to watch the object:

We observed the object use the red beam approximately 6 or 7 times, sweeping the sky and ground areas.

The object then began to move slowly to the east, and the officers followed. When they had reached the Vina Plains Fire Station, the object was approached by a second object that came from the south.

The second object moved near to the first and both stopped and hovered for some time, occasionally emitting red beams. After a time, both objects vanished below the eastern horizon. They had observed the first object for a total of about two hours and fifteen minutes.

When they returned to the Tehama County Sheriff's Office, they found that the object had also been seen by Deputies Fry and Montgomery, as well as by the night jailer. All described the same thing.

The next day, Officers Carson and Scott drove to the Red Bluff Air Station to discuss the sighting and to speak to the operator that had seen it on radar. The Air Force, however, now denied that the object had been seen on radar, contradicting what the radar operator had told Deputy Fry the night before.

The visit was completely unproductive.

More information regarding the sighting was obtained by NICAP(National Investigations Committee on Aerial Phenomena) advisor Walter N. Webb, who contacted Carson and received a copy of the report, drawings of the object, and a letter from Carson.

We made several attempts to follow it, or I should say get closer to it, but the object seemed aware of us and we were more successful remaining motionless and allow it to approach us, which it did on several occasions.

In the original report, Carson also mentioned that:

Each time the object neared us, we experienced radio interference.

Again, from the letter to Webb:

The object was shaped like a football, the edges, or I should say outside of the object were clear to us...[the] glow was emitted by the object, was not a reflection of other lights.

What was the "official" explanation for the sighting? In a letter to a NICAP member, the Air Force said: The findings [are] that the individuals concerned witnessed a refraction of the planet Mars and the bright stars Aldebaran and Betelgeux. . . [temperature inversions] contributed to the phenomena as the planet Mars was quite low in the skies and the inversion caused it to be projected upward.

A contributing factor to the sightings could have been the layer of smoke which hung over the area in a thin stratiform layer. This smoke came from the forest fires in the area hung in layer due to the stable conditions associated with the inversions.

They neglected to explain the fact that, as the sighting progressed, Capella would have risen in the sky, whereas the objects disappeared below the eastern horizon at the end of the sighting.

Officer Carson had this to say about the Air Force explanations:

... I have been told we saw Northern lights, a weather balloon, and now refractions.

… I served 4 years with the Air Force, I believe I am familiar with the Northern lights, also weather balloons. Officer Scott served as a paratrooper during the Korean Conflict. Both of us are aware of the tricks light can play on the eyes during darkness.

We were aware of this at the time. Our observations and estimations of speed, size, etc. came from aligning the object with fixed objects on the horizon. I agree we find it difficult to believe what we were watching, but no one will ever convince us that we were witnessing a refraction of light.

A check of the meteorological records of the area for that night by atmospheric physicist James E. MacDonald failed to find any evidence that would indicate the presence of a temperature inversion.

Over the next week, similar sightings were reported, including another sighting the very next evening by Deputies Fry and Montgomery that was also seen by a Corning police officer.