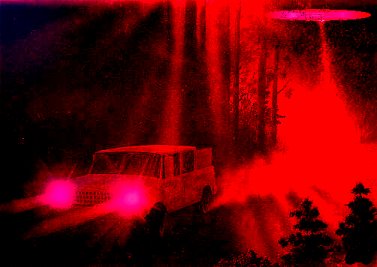 A heat wave from a flying saucer! A Sci-fi movie scenario? well, not really. The following account still stands as one of the best "physical trace" cases in UFO lore. The United States Air Force certainly took it seriously, and so should we.

Scoutmaster, D.S. “Sonny” DesVergers of West Palm Beach, Florida was driving three scouts home on the night in question. He turned off the coastal highway and down an inland blacktop to go where one of the boys lived.

After traveling about ten miles inland he noticed a bright light in the palmetto thickets.

At first he passed by it, but then stopped down the road and turned the car around to go back. He hesitated in doing this, but could not help feeling that the light might have been a fire, perhaps indicating a crashed airplane.

DesVergers stopped the car, and got out to proceed to the scene of the bright lights. The scouts objected, afraid to be alone in the darkness, but the Scoutmaster headed toward the thick brush not far from the road. Nearby were the swamps, full of snakes, alligators, and who knows what other deadly creatures. About 50 yards or so from the road, Des Verges disappeared into the waist-high thicket. As he did, the first thing he noticed was a terrible odor.

Using his machete to clear his way with one hand, his other held his flashlight to show the way through the darkness. He carried a second flashlight on his person. The boys, waiting in the car, could clearly see the beam of their Scoutmaster's flashlight through the brush.

Knowing he was being tracked by his flashlight, he shined it up into the canopy of some of the trees as he proceeded toward the unknown source of the lights that had caused him to stop on the road.

As he reached an opening in the brush, he paused momentarily to signal back to the waiting boys. As he did, he was suddenly overcome by an intensely humid heat. He glanced up into the clear night sky to get his bearings, but to his surprise, the many stars he had seen only a few moments ago were gone directly above him. Something else was blocking the view.

It took a moment for his eyes to adjust to a large, oval object which was hovering about 30 feet above him. As he slowly moved away from the frightening sight, he shined his flashlight toward the object. He could now make out the concave bottom of a smooth, round craft with a dome on top.

He continued to slowly move back from the object until he heard a sound which froze him in his tracks. The sound he heard was a large metal door closing. He now found himself surrounded by a red mist. He then lost consciousness.

The three boys, Bobby Ruffing, Chuck Stevens, and David Rowan could see their role model surround by what they could best describe as a "big red ball of fire." Frightened, they left the car, and ran as fast as they could down the road to a house. Finding a farmer, they told him what they had seen. The farmer quickly called the State Police who soon arrived at the scene. Deputy sheriff Mott Partin picked the boys up and drove back to the car.

As they arrived, they saw DesVergers racing from the wooded area. Partin said that DesVergers was more scared than anyone he had ever seen.

The other officers who accompanied Partin ran into the area vacated by the frightened Scoutmaster, finding one of his flashlights still burning. They also noticed that the grass was flattened near the flashlight. The master's second flashlight would never be found.

Arriving at Police headquarters, the officers noticed that DesVergers' hands, arms, face, and cap were all burned. Although the officers were doubtful of the red mist account, they believed the rest of the Scoutmaster's account enough to call the Air Force.

Edward J Ruppelt was heading the Air Force's Project Bluebook at the time, and was impressed enough to take an investigative group to Florida to question DesVerges. He was accompanied by Second Lietenant Robert M. Olsson, and two captains, Hoey and Davis. Ruppelt would interview DesVergers several times, and remarked that the Scoutmaster remembered details very well, and did not respond in a rehearsed manner.

He felt that DesVergers was telling the truth.

An Air Force surgeon did an examination on DesVergers and determined that his wounds were indicative of mild sunburn. There were singed hairs, burns on his face and arms, and also his nostrils showed signs of being burned by a "flash heat source." At the scene of the event, Ruppelt could find nothing to invalidate the Scoutmaster's account.

Although there were no apparent signs of scorched earth or grass, later it was revealed after tests at Dayton, Ohio that the roots of the samples of grass taken at the scene were charred.

Also, DesVergers' cap showed signs of being damaged by "sparks of some kind."

The three boys confirmed that the cap had not been burned earlier in the day. After interviewing the three boys, Ruppelt was convinced that they too were being truthful. DesVergers' story stands today as a documented physical trace account of a UFO encounter.