UFO Incident at USAF Missile Base 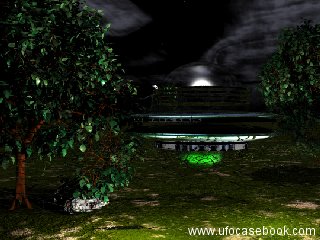 The information that you are about to read, about a UFO incident, was supplied to Vangard Sciences by Mr.Warren York. This information was obtained through the government Freedom of Information Act.

At 2147hrs., A-1C Phillips telephones WSC and reported that the situation at L-9 had been upgraded to a COVERED WAGON PER REQUEST OF Capt. Stokes, Larry D., FSO.

Upon arrival (2132hrs.) at Site #L-9. LSAT. Jenkins & Raeke, dismounted the SAT vehicle to make a check of the site fence line.

At this time Raeke observed a bright light shinning vertically upwards form the rear of the fence line of L-9. (There is a small hill approximately 50 yards behind L-9)

Jenkins stayed with the SAT vehicle and Raeke proceeded to the source of the light to investigate. As Raeke approached the crest of the hill, he observed an individual dressed in a glowing, green metallic uniform and wearing a helmet with visor.

Raeke immediately challenged the individual, however; the individual refused to stop and kept walking towards the rear fence line of L-9. Raeke aimed his M-16 rifle at the intruder and ordered him to stop.

The intruder turned towards Raeke and aimed a object at him which emitted a bright flash of intense light. The flash of light struck Raeke's M-16 rifle, disintegrating the weapon and causing second and third degree burns to his hands.

Raeke immediately took cover and concealment and radioed the situation to Jenkins, who in turn radioed a 10-13 distress to Line Control. Jenkins responded to Raeke's position and carried Raeke back to the SAT vehicle. Jenkins then returned to the rear fence line to stand guard.

Jenkins observed two intruders dressed in the same uniforms, walk through the rear fence line of L-9. Jenkins challenged the two individuals, but they refused to stop. Jenkins aimed and fired two rounds from his M-16 rifle.

The two intruders returned to the east side of the hill and disappeared. Jenkins followed the two and observed them go inside a saucer shaped object approximately 20' in diameter and 20' thick. The object emitted a glowing greenish light.

Once the intruders were inside, the object climbed vertically upwards and disappeared over the Eastern horizon. BAF #1 arrived at the site at 2230hrs., and set up a security perimeter. Site Survey Team arrived at the site (0120hrs.) and took radiation readings, which measured from 1.7 to 2.9 roentgens.

Missile Maintenance examined the missile and warhead, and found the nuclear components missing from the warhead. Col. Speaker, Wing Cmdr. arrived at the site and set up an investigation. A completed follow-up report of this incident will be submitted by order of Col. Speaker.

FOLLOW-UP INFORMATION: Raeke was treated at the base hospital for second and third degree radiation burns to each hand.

Raeke M-16 rifle could not be located at the site.