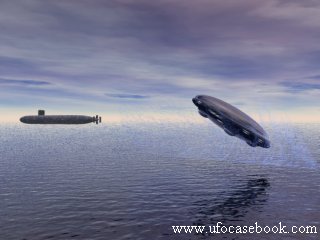 The question is often asked, why don't more military UFO witnesses come forward publicly, and provide names, dates and places? Surely they aren't REALLY intimidated by such empty threats as JANAP 146-E, which provides for hefty fines and jail sentences for breaking silence on a military UFO sighting.

Surely they realize the scientific import of their sighting transcends any nationalist or mili- tary considerations. If more military witnesses don't come forth publicly, isn't it possible that there aren't really as many as hardcore ufologists would have us believe? Its a question I've often asked myself.

ParaNet is deeply indebted to, and a little honored by, user Bill Cooper of Fullerton, California, for this, the first known report of a multiple military witness sighting that occurred onboard the submarine USS Tiru in 1966.

In 1966 during the month of the Rose Festival in the Pacific Northwest United States, the USS Tiru SS-416 left Pearl Harbor bound for Seattle Washington. The sub moored to a civilian pier near the downtown Seattle area and thousands of people toured the sub during its stay in Seattle.

After its duty as "showboat" it proceeded to a back bay area where it underwent torpedo trials. I believe the area was called Dabob bay [pronounced day-bob] but I am not sure of the spelling.

I include the above information because it should be easy to research. During the cruise from Pearl to Seattle five of the crew had a very unusual experience. During one late afternoon the sub was cruising on the surface at approx. 10 knots when the port lookout reported a strange contact at a range of 2 miles bearing 315 degrees relative.

The lookout refused to tell the OOD what it was that he had seen and instead insisted that the starboard lookout and the OOD both look at that area.

The three men looked through their binoculars toward the area reported and were astounded to see a metal craft larger than a football field tumble from the clouds into the ocean.

It actually tumbled end over end and when it hit the water and sank beneath the ocean huge geysers of water rose into the air. When the port lookout was sure that the others had seen it he then told the OOD that he had seen it tumble from the ocean up into the clouds.

The OOD and the starboard lookout were speechless. Within a few minutes, however, they all became excited when it again rose from the water and tumbled up into the cloud layer.

At about the same time a crew member below queried the bridge about a radar contact at the same range and bearing. Sonar also reported strange echos. The OOD called for the Captain to come to the bridge at that time.

He also called for the camera to be sent to the bridge. The Captain arrived on the bridge within 2 minutes and the Chief Quartermaster was right behind him with the camera.

The five men watched for quite a while longer but nothing else happened. Soon the sub had moved out of visual range and the Captain told all witnesses that they were never to discuss what they had seen with anyone under any circumstances.

He stated that the incident was classified information. The Captain then went below and sent a radio msg. There was no doubt as to what we had seen.

It was a metal craft with machinery on and around the outside of it. It appeared to have windows or lenses placed around its perimeter. It made no noise that we could hear. It did not disturb the subs electrical systems nor did it affect the gyro compass. It looked very much like a round flying "ship" as in sea going ship.

It had the shape and form of a saucer with a bowl inverted in the saucer and it was huge. I will never forget it as long as I live.

When I first saw this craft I believe that my heart literally stopped beating and I was terrified. The name of the OOD was Ensign Ball. The starboard lookout was an American Indian seaman that the crew called Geronimo.

The port lookout was a new man who left the sub soon after the return to Pearl Harbor and his name was Cooper. I do not remember the Captain's name nor the Chief Quartermaster's name.

This is the first time I have ever mentioned it since the moment that the Captain told me that it was classified. As far as I know it has never been reported to the public before this instant.

It should be easy to verify the facts if you can get a copy of the log and/or contact the other witnesses.

The names should not be too hard to find in the ship's records/logs. I was the port lookout. I must say that I feel a great uneasiness in posting this, much like the way I felt in Vietnam when my life was in great danger.